Darul Qasim College (DQC) announces the debut of a new branding design as the institution moves forward after being awarded a license to operate as a college in the state of Illinois. “This represents our efforts towards making Islamic knowledge a contributor in the mainstream American academic narrative,” says Founder and President of DQC Shaykh Mohammed Amin Kholwadia.  The new logo symbolizes the evolution of the College as it moves its mission forward into a second decade and a new phase.

The new visual identity was developed by designer and calligraphy artist Josue Vega, and DQC Communications Coordinator and Graphic Designer Sumaiyya Rahman implemented the final design.  Rahman states the new logo displays a clearer and bolder design inspired by the Ottoman tughra, a calligraphic signature used in Ottoman times.  Rahman and Vega studied the beautiful ways in which the tughra not only conveyed somebody’s mark or signatu 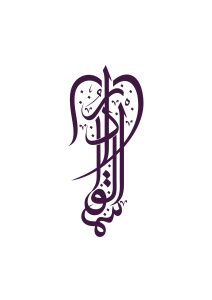 re, but also the use of different forms, like trees, boats, etc.

Vega notes while holding many similarities with the older design, the subtle yet poignant differences of the new design presents Darul Qasim College with a renewed strength of purpose accompanied by a gentleness of character.  “I wanted to give the logo a strong foundation but also convey the gentle character of a learned Muslim.  So I added movement to one of the willow tree branches.  I believe the character of the Prophet Muhammad ﷺ conveyed this very meaning.”

“This logo has many hidden aspects,” Rahman says, “from the image of a weeping willow to the use of calligraphy, all the while representing DQC with the words Darul Qasim hidden artistically among this pictorial and calligraphic representation.”  Vega shares, “The calligraphy features a classic thuluth Arabic script in willow tree form which gives the logo an elegant feel and pays tribute to classic Islamic knowledge.  The thicker trunk conveys a strong foundation in knowledge.”

The inspiration behind the calligraphic representation of the willow tree is rooted in the soil of the subcontinent and more specifically Darul Uloom Deoband.  It was there Shaykh Amin Kholwadia was inspired by his teacher, Mawlana Mohammed Meeran, under the branches of a willow tree, to return to the United States and very carefully plant the seeds for the Darul Qasim College that you see today.

The significance of the Weeping Willow highlights the past, present, and future of Darul Qasim College.  It is said to represent knowledge as rooted firmly in the soil of tawḥīd and sprouts out from underneath it as it seeks to emerge into the world of dissemination.  Knowledge then begins to acquire students and so its bark rises towards the sky seeking glory in the heavens.  As students of knowledge mature and realize their origin, they bow their branches towards the soil in recognition of their roots.  Out of awe, they start to weep and remain dedicated to their source.  The objective of Al-Qasim is to become this tree with Allah’s ﷻ leave. 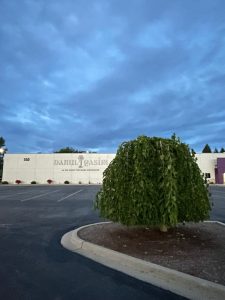 Shaykh Amin Kholwadia’s inspiration and the story of the weeping willow is a gentle breeze that can not only be felt throughout the halls and classrooms of DQC but also visually experienced through the weeping mulberry planted outside of the college.

DQC Board member Murtuza Hussaini oversaw the planting of the trees in 2016.  He shares, “although it brightens the landscape, it’s definitely not a landscape choice first!”  The Weeping mulberry is closest in similarity to the weeping willow.  It was felt that it best fit the theme of Darul Qasim and the story about the weeping willow.  “How it bows in humbleness to its Lord, as it grows taller.”

The intentionality of the logo is a reflection of the intentionality behind the aesthetics of the physical space that is DQC and the attention to artistic expression that is paramount to the telling and re-telling of the story of the Weeping Willow Tree and the birth of an idea.  Rahman and Vega have very carefully and masterfully translated Shaykh Amin Kholwadia’s vision and DQC’s story with a timeless and classic logo that is rooted in the past, but simultaneously extends out into the future.

DQC will brand its updated identity across multiple platforms.

“We wanted a logo that was refreshed and marked a new phase in the life of Darul Qasim,”  Rahman added, “something that would represent our institution’s historical roots but also our innovative spirit.  Josue Vega did a great job of capturing all these elements and blending them into a design that will serve our college for years to come.”

Previous PostSūrah Dhāriyāt (51) Session 1Next PostThe Kalam Reading of a Sūrah in al-Rāzī’s Tafsīr: A Medium for Discovering the Sūrah Structure (10/30)