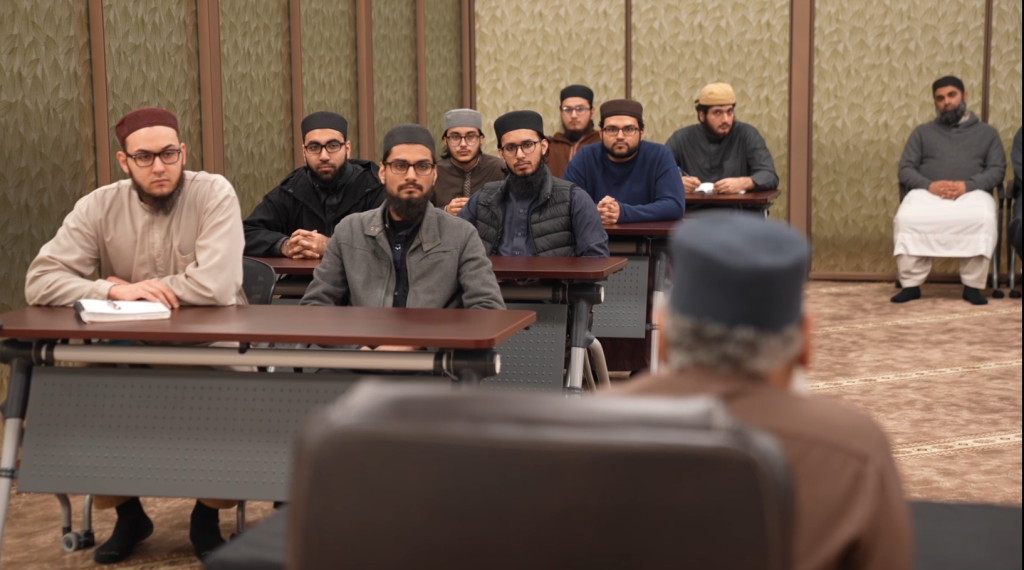 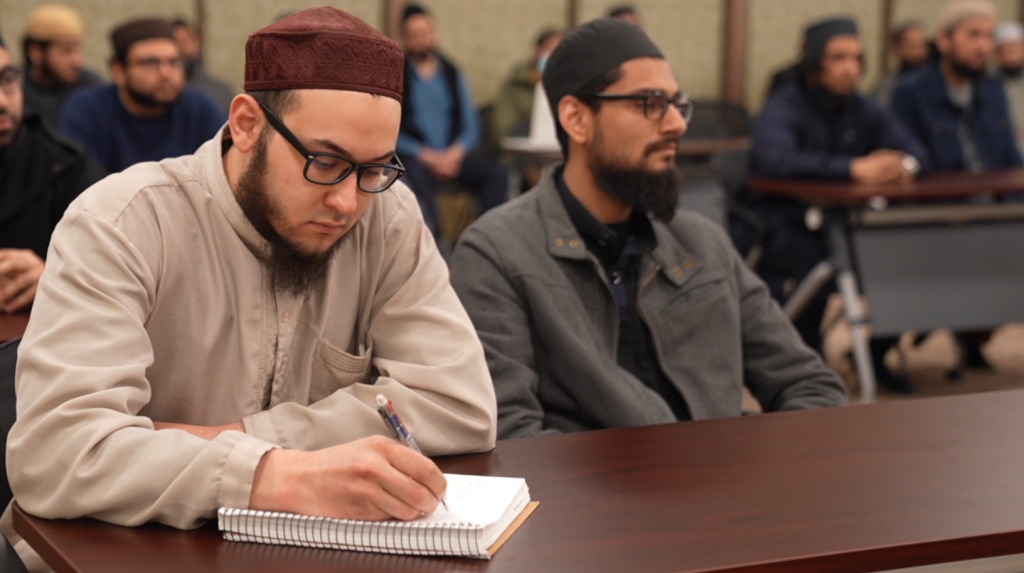 Like many students at Darul Qasim, Hussam Bteibet, 3rd year student in the Intermediate Program, balances both his professional career with his quest for more knowledge. Hussam received his bachelor’s degree in Computer Science from Cleveland State University in 2016. He is currently working as a cybersecurity engineer for a software company. How is he able to give time to his studies at Darul Qasim and perform a full-time job? He explains:

“I attend classes before the beginning of my work day, then use my time outside of work to study for classes and spend time with my family. It helps immensely that my wife takes the same classes as me, mā shā Allāh, so we help each other study if there is a concept that one of us doesn’t understand. Managing time between school, family, and work is possible, but requires some planning.”

When asked about his journey for more knowledge, it is apparent finding the right words is not only difficult, but also feels inadequate. Giving voice to one’s quest for knowledge is no easy task. Even more difficult is describing what it means to walk through the gate of knowledge and the transformations of self that occur along the way. Yet, every Darul Qasim student speaks of the certainty that has taken root in a space that fosters critical inquiry. What makes Darul Qasim’s educational approach unique is this sort of inquiry is taught alongside a methodology of love, respect, and reverence. Hussam puts it so eloquently:

“The reason I continue to choose Darul Qasim is the balanced critical nature of the teachers. It’s just so impressive. For example, a student asked Mawlānā Bilal in class: what works can we read critically and what works can we read uncritically [or] just kind of blindly accept whatever the author poses. Mawlānā Bilal said something I found very insightful. [He said] we must read everything with a critical eye, but  to learn to be critical you need a guide.” 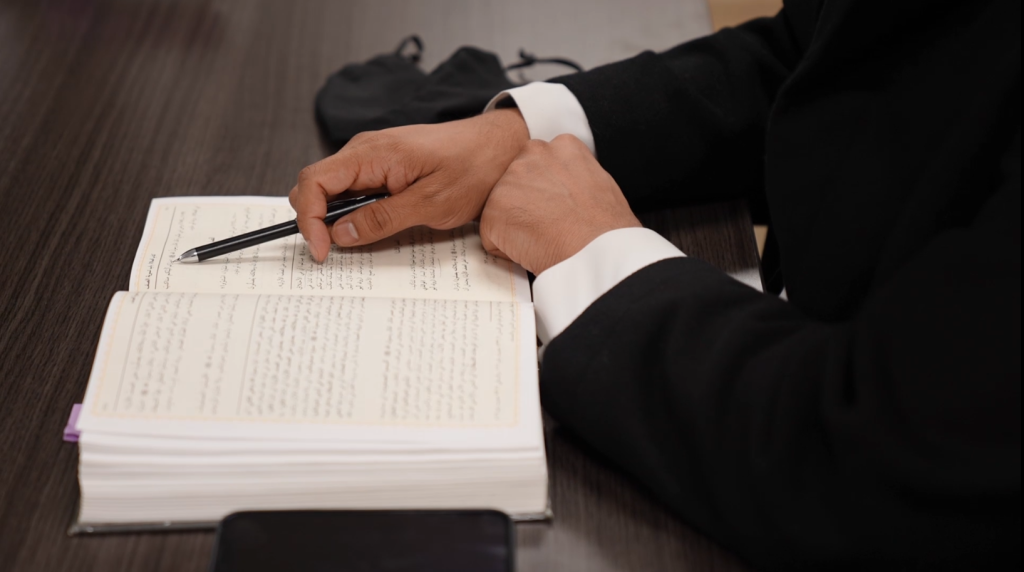 For students at Darul Qasim, like Hussam, critical inquiry becomes a pathway towards certainty. At the same time, this journey necessitates a guide. Those guides are the well-trained and illustrious faculty at Darul Qasim, who use a pedagogical approach that not only teaches the mechanics of approaching a text, but also a method of inquiry that is rooted in respect and reverence. It is through this process that certainty takes root. Hussam explains:

“You arriving at that conclusion, roots the certainty inside of your heart that this idea, this process is cogent. It’s correct. It makes sense. That’s when it becomes fulfilling. […] If you just blindly accept it,  you might remember it, but it doesn’t sit in your heart.”

Inside the doors of Darul Qasim, Hussam sees this method of learning taking place on a daily basis. He describes his guides as “well-rooted within the tradition and within the fraternity of scholars” which he feels is quite rare. For Hussam, all of this is possible due to the small class sizes and a classroom culture that creates a safe space for critical inquiry. The student-teacher relationship is at the center of this culture, as Hussam talks about how easy it is to connect with teachers. “I feel comfortable approaching a teacher [and even] connecting outside of the classroom to discuss ideas.” At Darul Qasim learning and teaching goes beyond the walls of the classrooms and into the lives of both teacher and student.

Getting to Know Hussam 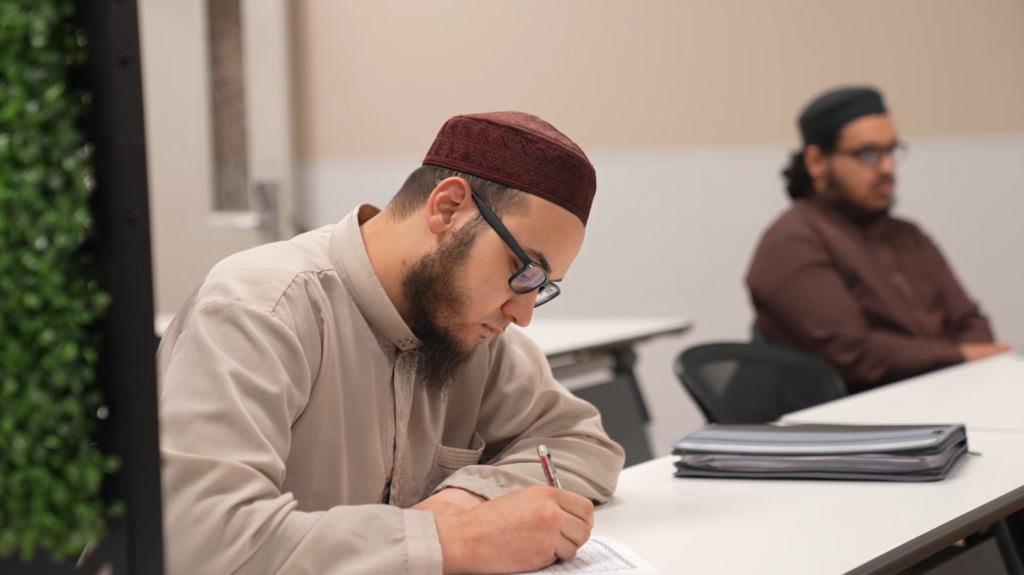 Hussam Bteibet is a part of the diverse student body and faculty that is Darul Qasim. He is a Palestinian, born in Jordan, and lived most of his life in Cleveland, Ohio with his family. His initial introduction to Darul Qasim was in 2011, where he met Shaykh Musa Sugapong.

Prior to Darul Qasim his only Islamic education was through weekend school and private lessons with his mother. She “gave me my foundation in reading the Qurʾān and Islamic Studies.” With Shaykh Musa he focused on learning to read the Qurʾān with more fluency and soon after began taking syntax and morphology classes. Eventually, he started learning fiqh and hadith terminology. “Shaykh Musa, as well as other scholars, recommended I move to Chicago to enroll in the full time program, and I took their advice and moved last year.”

In the last year, Hussam has not only gained an appreciation for what he refers to as the “intellectual side of Islam”, but he has also found “clarity in all aspects of my life.”  He thinks back to his highschool and college years when “I simply knew that praying and being Muslim was “good”, but how and why Islam was good was unclear. I had questions that were unanswered […].” As he continues to progress in his studies he finds depth, organization, and attention to detail in every class, from Arabic to Fiqh to Hadith terminology from both his teachers and the authors of the texts he’s studying. “I feel pride in being Muslim because I am connected to an awe-inspiring tradition.”

Hussam has recently started another journey as a first-time father. He reflects, “fatherhood added another dimension to my studies here. […] I’m here to raise my kids correctly and make sure they take the correct path.” He circles back to how in many educational spaces taking on fatherhood can limit one’s capabilities within the classroom. But at Darul Qasim he finds that not to be the case. He appreciates the flexibility of his teachers and also their genuine advice in regard to his new role as a father. Struggles do exist, but he is not alone in tackling them.

One of the greatest struggles for Hussam has been moving away from home.  “As difficult as it is for me, I know it is even more difficult on my parents, may Allāh ﷻ increase their rank. What helps both myself and my parents with this struggle is knowing that I will move back after studying at Darul Qasim.”  Nonetheless, he is certain that the path he has chosen is necessary and is a path that he will forever travel. 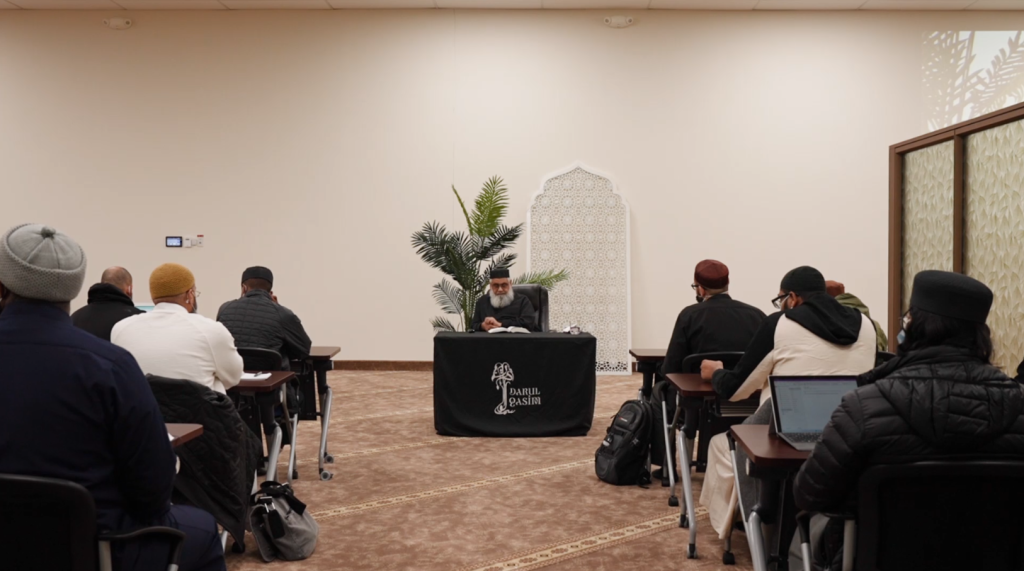 Darul Qasim has been instrumental for this young father and he walks through this gate with great love, reverence, and respect for his guides past and present. For Hussam, this is a story not only worth telling, but also worth listening to and living when the opportunity arises.

“I did not know that somewhere like Darul Qasim still existed in the 21st century, especially not in America. It is important to tell this story because Muslims need to know that there is an institution dedicated to providing traditional Islamic knowledge, in the context that we live in, at a level which is unmatched anywhere else in America.”