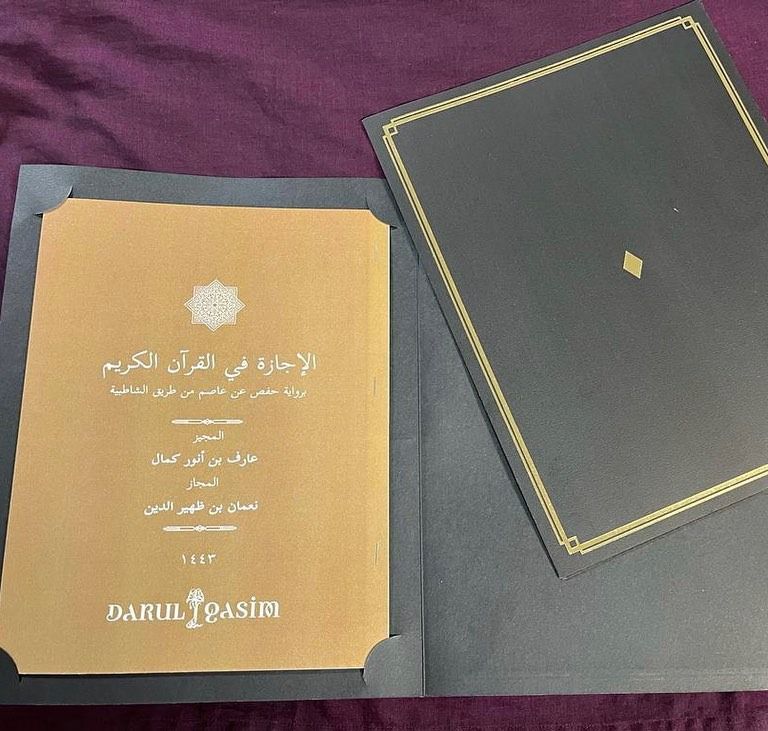 On March 4th, 2022, Darul Qasim honored this year’s ijāzah recipients: Ḥafīẓ Noman Zaheer, Ḥafīẓ Omar Ahmed, Ustāda Quratulanyn Sozzer, Muqri’ah Sayeeda Hikmat. These intermediate and advanced level students received their ijāzah (authorization) in the recitation method of Imām Ḥafṣ ʿan ʿĀsim through the sanad (link of teachers) of Mawlānā Arif Kamal, head of the Department of Qurʾānic Recitation. This certification is awarded after completing the recitation of the entire Qurʾān from memory with excellence in tajwīd according to the recitation of Imām Ḥafṣ. Imām Ḥafṣ was a student of Imām ʿĀsim who was connected to various ṣaḥābah including ʽAbdullah ibn Masʽūd and ʾUbayy ibn Kaʿb connected to our Beloved Prophet ﷺ who was connected to Angel Jibril and Angel Jibril to Allah ﷻ, the Most Exalted!

The day was one filled with many gems of wisdom and lessons for all students of Darul Qasim, who were attendees of this auspicious event. The ceremony began with the honoring and awarding of long-time student Sikander Saeed. Mawlānā Asif shared that Sikander has been consistently studying with him since 2016, yet his memories of him seeking knowledge go even further back. Mawlānā Asif was still a child when Sikander was recording tafsir at Islamic Foundation. And his pursuit of knowledge remains steadfast and consistent. He said Sikander is the embodiment of the hadith:  “The best of deeds are those that are consistent even if they are small.”

Shaykh Amin went on to honor Sikander and mentioned that he was a pillar of the Islamic Foundation community. Later on, he went on to become a great pillar of support for the CPSA community as well. His role at CPSA helped him to support Darul Qasim in its infancy. Sikander graciously allowed Darul Qasim to use the classrooms of CPSA to have their classes. CPSA became a second home for Darul Qasim. Shaykh Amin added how inspiring Sikander’s pursuit of knowledge is for younger students and his dedication and resolve illuminates the path of studying that goes from the cradle to the grave.

The program continued with reflections and lessons from Mawlānā Arif Kamal, Chair, Department of Qurʾānic Recitation. He began by mentioning that the students receiving ijāzah (authorization) sit in the front to honor them in this world and hope for that honor in the next world. In speaking about the virtues of Ahl al-Qurʾān, Ibn al-Jazarī رحمه الله mentions that the honor that insān (humankind) obtains is only through what they memorize and the knowledge that they acquire. Due to this, the most honored of the ummah will be the Ahl al-Qurʾān because they have memorized the Kalām of Allah ﷻ and they have obtained the knowledge of the Qurʾān. So much so, that Allah ﷻ will brag about the Ahl al-Qurʾān to the angels.

Mawlānā Arif then spoke about inspirational examples of reciters of the past. Imām ʿĀsim رحمه الله was the leading teacher in Kūfah before Imām Ḥamzah رحمه الله. At first, Imām ʿĀsim told Imām Ḥafṣ to read one ayah per day. Eventually, with consistency and more practice the amount recited would increase. The general habit at the time was to recite 10 āyāt (verses) at a time.

The common theme with reciters of the past is that they would never stop learning. One such example is Imām Warsh رحمه الله. Imām Warsh رحمه الله finished 20 khatamāt (Qurʾān completions) with Imām Nāfiʿ رحمه الله. At first, he traveled a great distance to study with Imām Nāfiʿ رحمه الله and he would only recite 10 āyāt at a time. Other local students noticed he came from so far away so they would donate some of their āyāt allotted to recite to Imām Warsh so he could recite more āyāt.

The Qurrāʾ were experts in all fields, not just Qurʾān and they were known for their piety. Imām Ḥamzah رحمه الله was never seen not moving his lips with the recitation of Qurʾān. His habit was to do 27 khatamāt in months outside of Ramaḍān. The Qurrāʾ never stopped learning as our motto at Darul Qasim is in the quest for more knowledge.

It is understood that it is impossible to perfect recitation. Perfection is not a quality of Insān. The quest to learn and improve is our objective. As Imām Shaṭibī said, “may Allah ﷻ reward the Aʾimmah (Imāms) with the best, as they transmitted the Qurʾān to us as it was revealed.” May Allah ﷻ allow all of us to be amongst the Ahl al-Qurʾān.

Shaykh Amin concluded the event with words of encouragement. He urged all to learn more and more like the students and teachers involved in this auspicious event. He highlighted the need to keep the sunnah and qiraʾāt alive and reminded us all this is why Darul Qasim exists. As Imām ʿAbd-ʿAzīz رحمه الله says, 17 areas of ʿulūm came to the Prophet ﷺ. Nūr (spiritual effulgence) resides in learning from the books and the teachers. We do not become ʿulamāʾ (scholars) until we read the books. ”You are an intellectual if you study the dīn (religion), the dīn resides in supreme intellectual discourse.”

Shaykh Amin reminded all in attendance that we need to be intellectually equipped to defend and promote Islam to handle everything here in the United States. The revival of Islamic sciences at Darul Qasim is a wonderful sign of Allah’s ﷻ faḍl (beneficence) upon us. Islam is pure intellect.